I got inspired by

oniwitch to sort through my lolita stuff. I'm really proud of how calmly I manged to go through all my socks and headdresses! It took a good hour and I'm sure I'll mess it up as soon as I need something from my drawer but I'm entitled to admire it while it's still neat and tidy.

Tuesday was lolita day for Miss Sonia and I.

I don't have any good photos on my camera of the two of us because I barely took any. I seemed to have used up all my SD card memory on demonic squirrels.

Wearing pink out is definitely a new experience for me. Sweet lolitas seem to garner a lot of attention people asking us about our missing sheep. -_- It's too bad I really don't have a good response to that.

Cocky stranger: "Where are your sheep, sweetheart?"
Me: "Here they are! ^_^" *flips him the finger*

Cocky stranger: "Where are your sheep, sweetheart?"
Me: *smiles* "We don't have sheep, sir! ♥"

The street performer started playing "Mary Had A Little Lamb" when Sonia and I walked by. The clothing store somehow switched to a horrd Gwen Stefani song moments after we come in. It was terrible! I think I'm gonna sell all my pink jsks. I am a gothic lolita at heart xD I rather people just glance at me and then scurry away. Heh.

Anyway, Sonia if you are reading this... ilu bb! It makes me cry giant emo tears when we see so little of each other nowadays. Kinda makes me miss high school...except not really. I effing hate high school. xD

Special thanks to the lolitas that I stole some of these photos from. ♥

I wanted to take some pictures for Halloween so this is the best I can do without a camera. My HP laptop webcam fails hard compared to my Mac Photobooth so I resized all the shots for better quality. The end result is a hunch of Myspace-like whoring pics. I can't do anything about the high contrast because when I close my window blinds the pics are grainy and compleletely dark but if I leave my blinds open they are like this. I can't win. lol

Facebook - if I ignore it will go away. Currently I have 8 requests for varying things pending. I just can't bring myself to click on them. I am aware that it is infinitely frustration for my friends. Sorry.

I've found that stupid thing so wine and cheese pics for all. 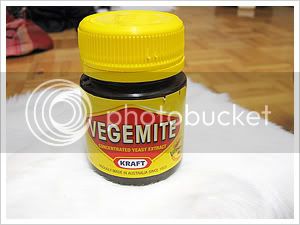 :D Thank you kindly for the vegemite,

euphro_syne. It's all I wanted for my birthday!

My two BTSSB head bows came in the mail today. One in pink and one in black. Now I'm going to whore it like there's no tomorrow. :D Also, a photo of the SWIMMER headphones I got a few days ago. I thought I liked the polka dots or bear pattern more but the pink/white/blue check ended up growing on me. (I wish photobucket wouldn't diminish my image quality so much. -_-)

I need maor clothes!@ Really bored of wearing the same things over and over again but my budget won't allow me to spend on anything big until April at least. :( I can forget about owning a BJD for this year as well. There's always 2008. x_X

Also picked up Full Moon Rising from the bookstore. Will start reading it before bed.

Hyperthyroidism = bad day. I was trembling all day like I was on drugs. And dammit, I really wished I had some drugs. My doctor hasn't prescribed anything the last two the times I went to get my thyroid disease checked.


[Edit] Should I re-dye my hair all red instead? These randomly placed professionally tin foiled patches are nice but very timid.

One some werid lolita inuition I decided to come home for lunch today. Guess what came two mintues after I arrived? My Meta packpage!! *happy*!

I got a white round headdress and Antique White Cotton Raschel-Lace Over Knee High Socks (Not striped yay).

I hate the cape though. It's the high collar squarish one instead of the prettier version :(

[Edit] Stupid Meta gave everyone a bonnet except me T_T

Wow I have top suck in a little bit a lot to wear the skirt.

I fail to see why Meta would give me a GLARING white head dress instead of the antique white verion they have of the same style.

I ordered a Bouquet Print Set in brown today from Meta. The pink set was sold out already on the website but brown was my first choice anyway. I hope the items fit because I don't want to pay 22548 yen for it to be unwearable. It's most likely gonna be a gift to any one of my friends if it doesn't fit. (You guys are lucky bastards you know that?)

Kinda regretting making an order for that second umbrella from BTSSB. The Alice and the Pirates one was probably enough but when they restocked the ruffled umbrella I wanted it pretty badly. :p

It's been about two and a half weeks since the F+F order. One more week at most for it to arrive? I need those blouses.

Also, waiting for that commissioned headdress which was be mailed a few days ago. LOL, a commission all the way around the world in New Zealand. Nice girl though. Pretty awesome people over there. ^^

The only real issue I have aside from being broke by the end of it is that nothing I bought matches. O_O Baka neh?

Eh, I'll figure something out...
Collapse